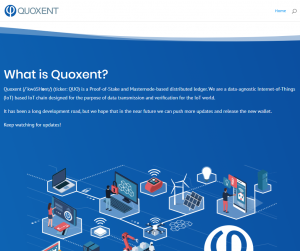 Quoxent ($QUO) has released new ecosystem information in preparation for their wallet release.

Whether it is a mobile-based origin scan, IoT data from a module inside the payload, or container-level tracking, QUO is building a solution that can handle your logistics needs.”
— Quoxent Website

SAN FRANCISCO, CA, UNITED STATES, January 20, 2020 /EINPresswire.com/ — Quoxent, LLC., the entity behind the curation of the code for the Quoxent Distributed Ledger (formerly Vulcano) has released a large website update and video describing their development trajectory in the field of logistics.

About their focus on logistics, Quoxent says, “The nature of the QUO distributed ledger lends itself perfectly for the tracking of logistics information. Whether it is a mobile-based origin scan, IoT data from a module inside the payload, or container-level tracking, QUO is building a solution that can handle your logistics needs.”

In addition to logistics, Quoxent is also working on a project called “DataBlossom,” which is for the tracking of climate data, and has a current research partnership with Thailand’s Rajamangala Institute of Technology for the creation of distributed earth-sensing equipment to aid in the monitoring of volcanic activity. This is of special relevance to the Quoxent team, as several members of the team and community have been deeply impacted by the recent eruption of the Taal volcano in the Philippines.

Rabirundo Bardinas, Quoxent Team Member and resident of the Philippines said of the recent eruption, “Taal was such a silent beauty, who could have imagined the effects of its eruption? What Taal has given us is now being taken back. The lake for the fishermen and the rich volcanic soil for the farmers have now been choked with ash. Monitoring is vital for the safety of the residents living near all volcanoes, as even small changes in temperature and chemical composition could lead to deadly dilemmas.”

Also posted on the new Quoxent website is a call for additional team members, “Quoxent is always looking for talented developers, engineers, designers, and researchers seeking to push the boundaries of science, design, and distributed ledger technologies. With Quoxent, you can work with a team that is dedicated to creating positive change, no matter what.”

Evidence of this commitment to making a difference can be seen in Quoxent’s support of Tego’s Charity, a Venezuela-based charity dedicated to providing help for disadvantaged populations in Venezuela. Ernesto “Tego” Sánchez, the founder of Tego’s Charity and a Quoxent Community Representative in South America, says, “All [blockchain] projects must have some level of social responsibility to not only provide technology to make a difference, but also use that technology to provide sustainable support to the less fortunate. [Cryptocurrency] is a new and emerging asset class that all charities need to learn, adopt and implement in their operations.”

Of the recent progress the Quoxent team has made, Project Director Jason Brink said, “What we have accomplished thus far has not been easy or simple, but we will not stop working until we have achieved our long-term goals of creating an ecosystem that gives users control of their own data while also permitting IoT data to be stored in perpetuity on a distributed ledger. This is something we have been working on for years, and we aren’t going to stop anytime soon.”

An Introduction to Quoxent for Logistics – How the Distributed Ledger can make tracking faster, more reliable, and tamper-proof.