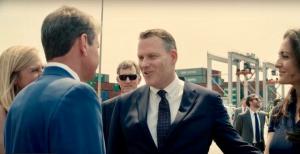 Savannah, GA. (April 27, 2019) –Capital Development Partners has announced that Plastic Express, a leader in the plastic resin industry, has signed a long term lease on Building I, a 1,075,000 SF dual rail served facility located at the Savannah Port Logistics Center for exports of U.S. made products.

Capital Development will invest more than $172 million in infrastructure and buildings to serve the needs of customers at the Port of Savannah. The state of the art facility will process over 25,000 containers and 5,000 rail cars per year.

“Plastic Express will export more than 100 million tons of U.S. products per year through our facilities to Europe, Africa, India and Asia which brings significant dollars back into our economy” said Porter. “There will be over 166 permanent jobs created, more than 100 construction jobs created and an equal amount of manufacturing jobs. We invested heavily in infrastructure and facilities to support the Georgia Ports Authority which sets the platform for major job and economic growth.”

“We are excited that Plastic Express chose to expand their operations here in Georgia,” Governor Brian Kemp said on his 100th day in office. “The company’s impact will not only be felt in terms of job creation and investment, but they will be one of the top five export customers for the Georgia Ports Authority.”

“This is a game-changer and makes Georgia a leader in the Southeast for the export of resins,” said Georgia Ports Authority Executive Director Griff Lynch. “With growth accelerating in the American energy sector, Gulf-area refineries will require alternate export capacity, and the Port of Savannah stands ready to serve that need.”

Headquartered in City of Industry, California, Plastic Express is a major exporter and shipper of plastic resins and PVC which is a fundamental commodity for the manufacturing of multiple products including construction materials. The company will start major operations in Savannah during October of 2019.

“We are very happy to plant our flag in Savannah with Capital Development,” said Ray Hufnagel, Plastic Express President and CEO. “Plastic Express has been searching for a strategic opportunity in every viable port location in the Southeast for a few years. The impressiveness of the Port of Savannah’s operations and Capital Development made this a clear choice for us.”

ABOUT CAPITAL DEVELOPMENT PARTNERS:
Capital Development Partners is an Atlanta, Georgia based developer and investor of industrial facilities and infrastructure for e-commerce, manufacturing, high speed distribution and heavy industrial customers in the top U.S. gateway and constrained markets. The company is led by CEO John Porter and is developing world class industrial facilities and infrastructure in Georgia, New Jersey and Texas.